On May 22, 2017, the WeLoveU Foundation held a cleanup as a part of the Clean WORLD Movement to cope with climate change. Around 70 volunteers came together to clean the Newark Bay Shoreline that was in need of some attention. Contrary to how some may spend their Sundays, WeLoveU volunteers spent their morning helping their community.

Donning gloves and holding garbage bags, they made their way to the Bayonne shoreline. At first glance, the group couldn’t see much. However, as they were walking along the sand and checked near the water, it was clear all 70 volunteers were needed for the project.

Ready with their rain boots, volunteers waded into the water to clear out planks of wood and car tires that were half hidden in the wet sand. There were also plenty of bottles, bags, cups and other trash to be picked up, and they cleared the area of any unsightly pieces of wood and old logs. Around a bend at the far end of the shore, they picked up buckets, barrels and pallets that had been discarded.

Bayonne Mayor Jimmy Davis, as well as Council President and Council Member At-Large Sharon Ashe-Nadrowski and Council Member At-Large Juan M. Perez came to show their support. They thanked the seventy WeLoveU Foundation volunteers for using their time doing such meaningful work. They were inspired by the group’s willingness to help, and the joy they had while doing so. They took pictures together with the volunteers and encouraged them to continue setting a good example in the community.

All in all, they collected about 80 garbage bags, at least 6 tires and many other items that were littered along the Bayonne Shoreline. As far as cleanups go, this one was a great success! The WeLoveU Foundation will continue lending a helping hand throughout New Jersey for a cleaner environment.

In the Heart of Charlotte

On Sunday, May 21, 2017, 40 WeLoveU volunteers from North Carolina joined forces to clean Nations Ford Road. Excited to serve their community, the group planned to spend their day cleaning along the busy intersection that cuts through the heart of Charlotte.

This local volunteer service falls under WeLoveU’s Clean WORLD Movement. It’s a global initiative to raise awareness about the importance of environmental protection in the face of climate change.

In 500 regions across 50 countries, thousands of volunteers organize local and state-wide cleanups to cope with climate change. It’s a recurrent topic reported in today’s news. In addition, it’s recognized by government agencies including the United Nations as a pressing issue. WeLoveU performs various community service projects to raise awareness for a sustainable and healthy environment.

To prepare for the cleanup, volunteers ate breakfast together and prepared carpool arrangements. Upon arriving, they grabbed their tools including trash pickers, gloves, and trash bags, ready to work. While cleaning, they found trash like glass bottles, old television sets, and tires.

A volunteer said, “We just started [cleaning] and it is already making such a big difference out here. Sometimes it’s hard for one person to do a big task alone, but it’s always easier when many people unite.” One neighbor said, “Yes! Finally, someone is cleaning up our streets!”

Moments later, volunteers began carrying larger items together like mattresses and televisions. Motorists driving by honked their horns as a “thank you” for cleaning the area. Pedestrians, too, walking by said thank you and cheered them on.

The enthusiasm exhibited by the volunteers stems from their realization about climate change. It does not just affect one area on the map, but all countries around the world. The Clean WORLD Movement is bigger than what they imagined while cleaning a small area, compared to the rest of the world. Every part counts while coping with climate change.

Jerry Green, the Code Enforcement Officer from Charlotte, said, “We really appreciate your hard work and efforts. I hope that we can continue to work together in the future.”

At the end of the cleanup, the volunteers tossed the trash into a ten-yard long dumpster, filling it to the rim. The area became visibly cleaner to neighbors, who did a double-take at the revitalized field. The volunteers look forward to serving their community in the future by promoting a cleaner environment—one project at a time. 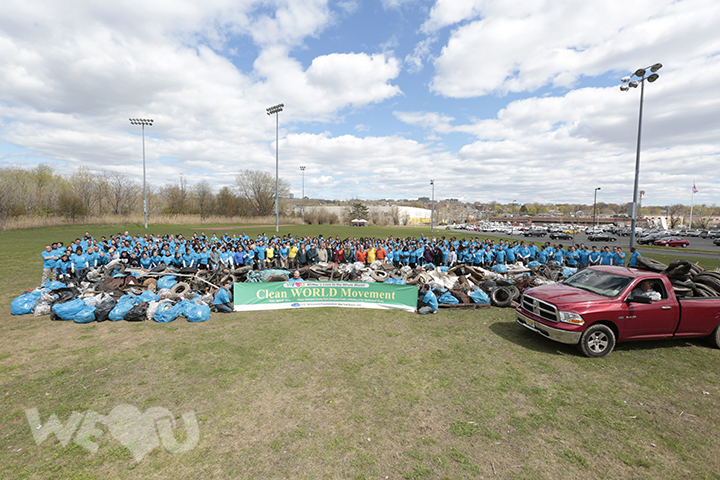 On April 27, 2014, More than 300 volunteers of the International WeLoveU Foundation performed the largest cleanup in the history of the Palisades Park Commission. The Hackensck Mayor Labrosse as well as Captain Bill of Hackensack Riverkeeper delivered special proclamations and awards to the foundation for the more than 100 tons of garbage collected.

The Hackensack Riverkeeper is a steward for the watershed and works to raise awareness about protection and defense of the eco-system, river and wildlife habitat. Together with the Palisades Park Commission, they strive to prevent areas of Overpeck park and other regions from becoming dumping grounds filled with trash and debris.

WeLoveU volunteers walking back to the main site after a day of picking up trash at the Ross Dock.

On April 6, 2014, the Ross Dock Picnic Area in Fort Lee, NJ got a makeover when 150 volunteers from the International WeLoveU Foundation came to clean up beneath the George Washington Bridge, by the beaches and all throughout the park. Considering their global Clean WORLD Movement to inspire environmental activism and selfless service across the world, the members came out with a mission to make a difference in their community.

Volunteers could be seen on the outskirts of the Ross Dock Picnic Area picking up cigarette butts, glass bottles, trash and all kinds of debris. From across the George Washington Bridge, a stream of blue shirts could be seen hoeing with rakes and brooms along street corners, sidewalks and pathways. Working in perfect unity and with smiles on their faces, the volunteers assembled in lines to remove bundled leaves and caked dirt along open spaces of the park. And more than 50 volunteers were tiptoeing among the rocky crags of the shorelines gathering heavy metal objects, pipes, old chains, and even an entire engine.

WeLoveU volunteers hauling out a rusted engine from the rocky shoreline.

Christina Fehre, a Trail Supervisor from the Palisade Interstate Park Commission, said that the WeLoveU volunteers were able to dispose of trash and liter that had been neglected for the past 20 years. She commented about her experience with the WeLoveU Foundation.

“Just to see the unity, and to hear how their leader inspired them, it inspires me as well to continue to grow and be a stronger leader,” Fehre said.

In fact, this is one of the core missions of WeLoveU; to further inspire and create a world of leaders led by love, following the example of Chairwoman Zahng Gil-Jah. Despite her position as Chairwoman, she can be found working tirelessly with her own hands until the job is completed. Seeing this labor, the volunteers strive to inspire the world around them carrying out social and child welfare projects, environmental cleanups, disaster relief and much more.

Come the conclusion of the cleanup, more than 50 trash bags had been compiled close to the center of the park where the members stood together over their labor. To those participating, the cleanup was more than an ordinary environmental activity, but rather a way to deliver love and establish unity that is rebuilding communities, and creating friendships beyond nationality, race, and socioeconomic status.

The International WeLoveU Foundation can be found in 53 countries across the globe and looks forward to continuing in efforts to bring peace and love to the global village through the Clean WORLD Movement and other welfare activities.

150 WeLoveU volunteers gather with the trash they removed from the park, beaches and surrounding roads.

Volunteers of the International WeLoveU Foundation removed more than 12,000 lbs of debris from the Jamaica Bay shoreline.

On April 22, 2012, volunteers of the International WeLoveU Foundation removed more than 12,000 pounds of debris including tires, metallic objects, trash and much more from the Jamaica Bay shoreline. The effort was part of the global Clean WORLD Movement to protect the natural environment and leave a better world for tomorrow’s descendents.

The effects of human activity on one of New York’s richest wetlands has threatened the ecosystem, productivity and wildlife habitat since the nineteenth century. Widespread pollution and debris has clogged the coast and WeLoveU volunteers helped to remove much of the unseen damage and debris.